Is specificity of the skin test over-estimated?

Data was supplied by DEFRA in June 2017 which clearly shows that the risk of an animal being disclosed with TB reduces as herd size increases. This page looks at the implications of this on how the specificity of the skin test may be over-estimated when the skin test is performed in high risk areas. If this is happening, the proportion of cattle reactors, which are TB-negative, is higher in high risk areas than in the low risk areas where test specificity was calculated from the results of herd tests.

In December 2016 the Veterinary Head of TB policy in APHA, Dr Malla Hovi, spoke in front of the Welsh committee on Climate Change, Environment and Rural Affairs. At this time, Dr Hovi had been in this role for 5 years. The following8 shows what she said regarding the impact of herd size on the reproductive rate at which bovine TB spreads from animal to animal.

[364] Dr Hovi: There has been a huge amount of risk analysis carried out about TB and various different aspects, and it must be said that the herd size always comes out on the top. So, it usually wipes out all the other potential risk factors and there are constant arguments about whether being a beef herd or a dairy herd is a risk factor, but when you start carrying out the analysis and you put in the herd size, it tends to trump all the other risk factors. So, large herds are more at risk of TB. It's a combination of factors as to why that is: (a) we find it more difficult-with the imperfect tests that we have for TB in cattle, we find it more difficult to clear herds of TB when they are larger. So, you have just mathematically a larger chance of having a false negative animal in that herd. We know from herd-level modelling-and this has been carried out in other countries as well, not just here-that in large herds the reproductive rate of TB, of the disease, in large herds is much higher. It's somewhere between 4 per cent and 5 per cent, when in small herds it's very, very low; it's around 1 per cent. There's obviously more contact between more animals in a larger herd. There is more mixing. Larger herds also probably have more contact surface with the environment, whether it's other cattle herds or badgers, in the case of TB, and they tend to have more fragmented-they tend to be on fragmented holdings. So, cattle move around between higher risk areas and lower risk areas, often. So, those are probably the most common explanations as to why large herds are more at risk, but it's a fact that nobody will dispute.
According to the above extract the reproductive rate in large herds is somewhere between 4 per cent and 5 per cent and around 1 per cent in small herds. Another words the reproductive rate increases a number of times as herd size increases.

The following shows a Freedom of Information request submitted to APHA regarding the risk of an animal being diclosed with TB when herds of different sizes are tested.

Please send to me the annual number of cattle reactors per 1000 skin tests on a bovine in England when performing routine whole herd tests on the following herd sizes in each of the last 2 years. 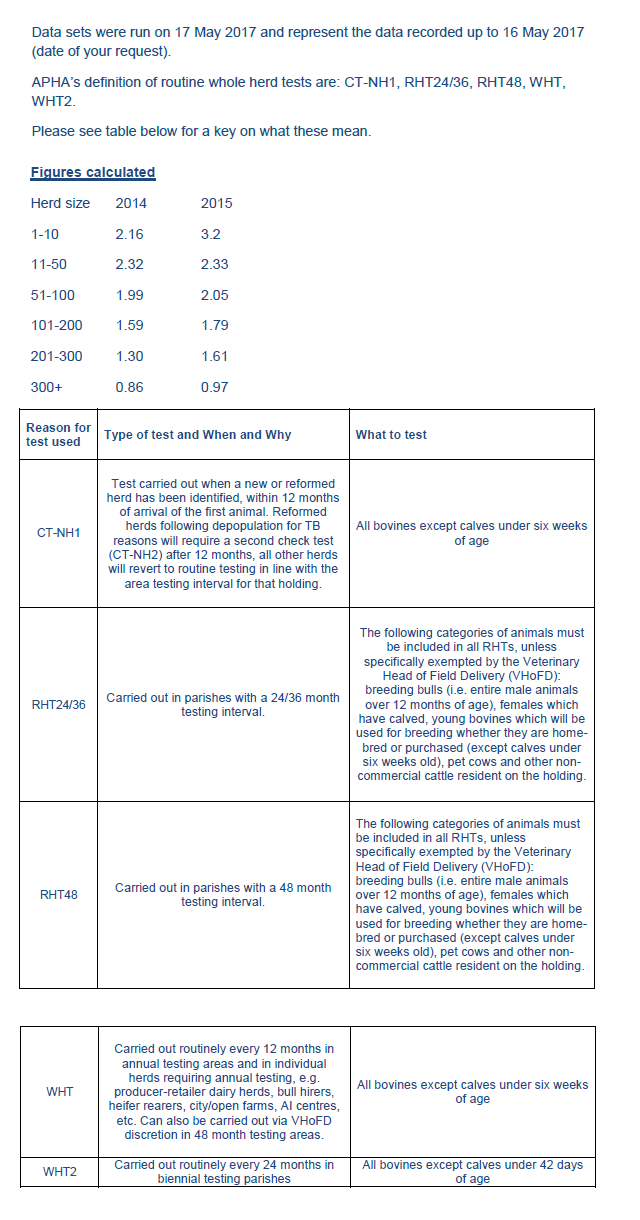 The graph below illustrates the figures calculated in the above reply.

Clearly the risk of an animal being disclosed with TB reduces a number of times as herd size increases.

How can this happen if the reproductive rate INCREASES a number of times?

The most likely explanation is that when a veterinary performs a skin test in these routine tests and interprets the result by assessing lump size, the veterinary applies discretion so as not to penalise a herd if it contains a large number of animals. If a veterinary did not apply this discretion large herds would continually be under restriction due to the numerical odds of finding a reactor simply on account of the test's specificity (i.e. tendency to give false positives).

If veterinaries are applying their discretion when testing large herds, do veterinaries apply their discretion when testing in areas where TB is not expected? If so, this has implications for the specificity of the skin test because this specificity was calibrated by looking at disclosure in routine herd test results in areas such as Scotland where TB prevalence was extremely low and not expected.

What evidence is there to support the argument that veterinaries apply their discretion when reading lump size?

Firstly DEFRA were extremely reluctant to supply data in response to the above Freedom of Information request. On first receiving the request, they argued that the information was not held1. Then when challenged on this, they changed their argument to the cost limit being exceeded2. After refusing to supply the information the case went before the GRC Tribunal on appeal. During the course of this appeal, DEFRA announced that it intended to file a witness statement in support of its case3. However that statement never appeared. Instead DEFRA relented, through their solicitor asked for the appeal to be withdrawn, and supplied the requested data. They argued that, due to an improved ability to respond to requests, they were able to respond to the request within the cost limit4. This whole process took 12 months. Although the following explanation is speculative and may not apply, perhaps DEFRA were reluctant to supply the requested information because it would reveal how veterinaries apply their discretion when interpreting lump size. If veterinaries applied discretion when testing in the low risk areas used to calibrate the specificity of the skin test, the actual specificity of the skin test when applied in high risk areas where veterinaries may not apply such discretion may be substantially lower. This line of reasoning is somewhat speculative. The following argument is less speculative. 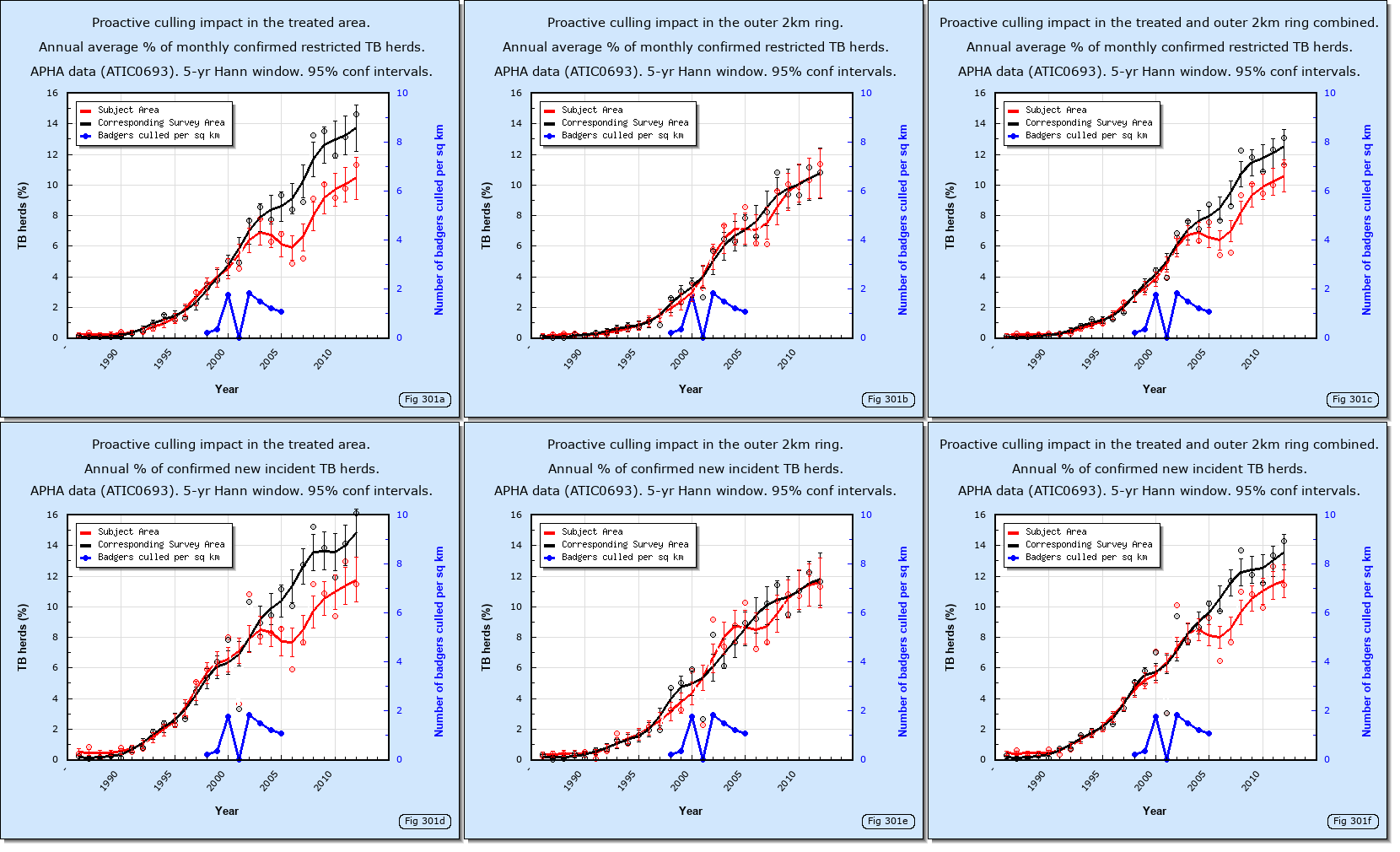 For breakdowns which are not confirmed, badger removal was found to make no attributable difference5. See the graphs below. 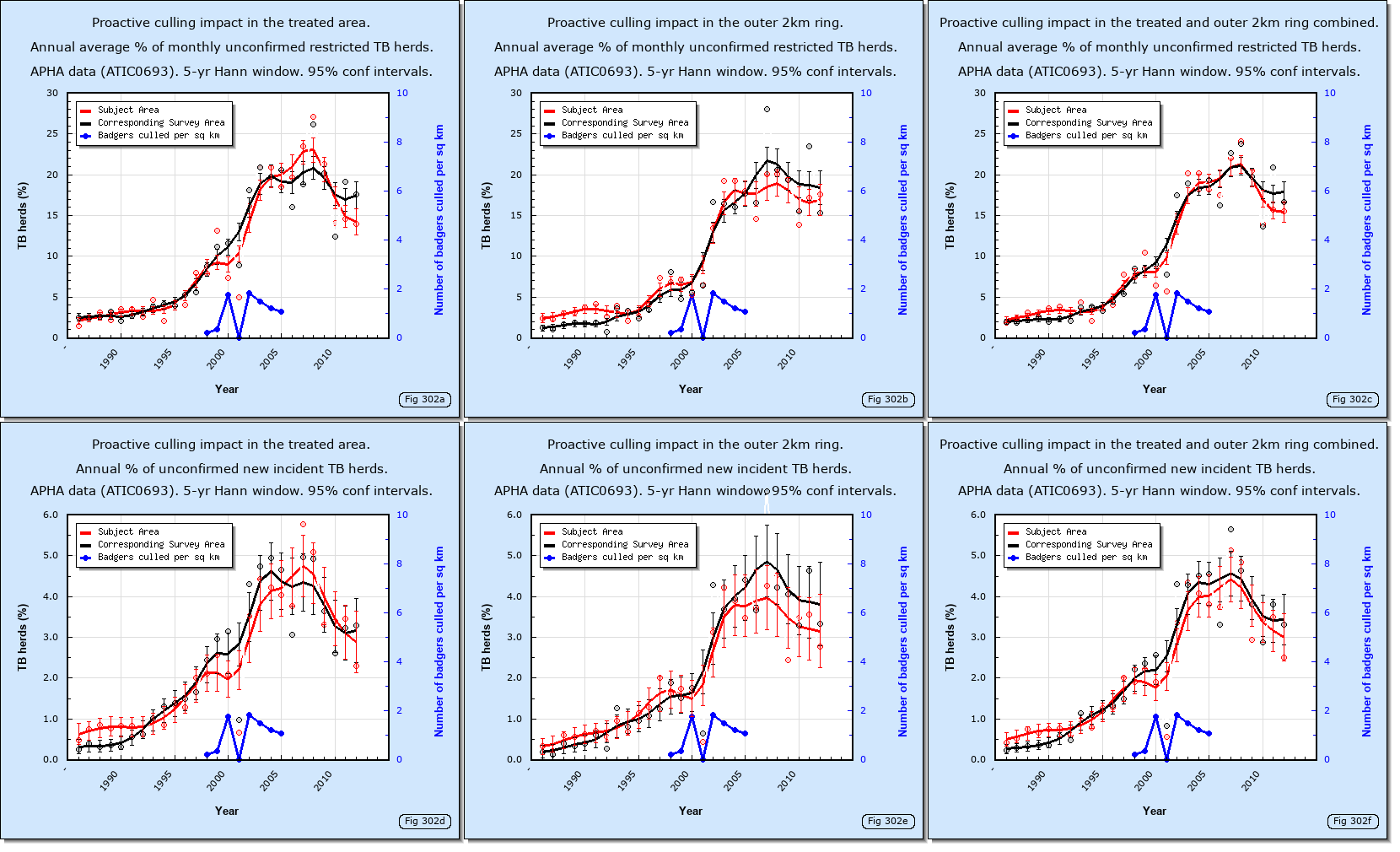 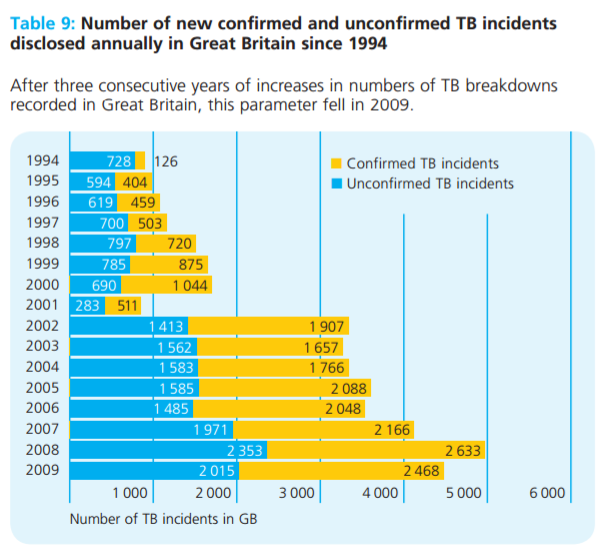 References
If you would like to send to me your comments, please contact me Last Modified 28 Oct 2017 14:44
Search
Tweets
Recent
Tweets by bovinetb
Javascript is disabled