Confirmed New Herd Incidence in RBCT rings from 1986 to 2012

The graph below shows confirmed new cattle herd breakdowns, or New Herd Incidence (NHI), when combined from all ten RBCT triplets. These breakdowns are shown as a proportion of all cattle herds registered by the Animal and Plant Health Agency (APHA) in each area. These proportions were accrued over a year from the number of breakdowns and herds supplied each month by APHA from 1986 to 2012. APHA supplied this data in March 2016. The lines on the graph connect points which were calculated by passing the supplied numbers through a Hann window spanning 5 years (2 years on either side of the central point). The graph shows 95% confidence interval limits. It also compares data collected in the outer 2 km rings (the adjoining lands) with data collected in the survey areas. Data in these survey-only areas are shown in green and adjoin areas where no action was taken and no badgers were culled. 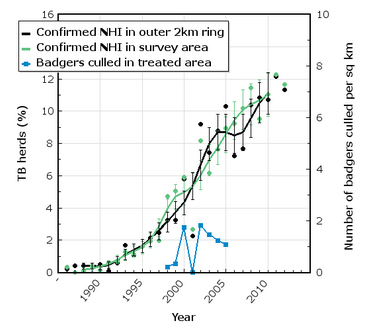 If you would like to send to me your comments, please contact me Last Modified 17 Sep 2017 15:25
Search
Tweets
Recent
Tweets by bovinetb
Javascript is disabled